After reading the Secrets of the Sambar trilogy and The Hunt Smart System books, and it all going in one ear and out the other, I decided to book into the course as I know there is no better way to learn than to be shown in the bush. So last weekend on 4-6 June I attended Errol’s first course for 2021.

After everyone arrived we got straight into it looking over the best optics for finding these deer. Then we examined actual tracks and using the 4 hooves from a 12 year old stag, Errol explained the difference in size and shape between stag and hind tracks, how to identify the front track from the rear, how to tell the left from the right and how to tell the tracks of a young sambar from a mature one.

Then standing near the bottom of a large gully Errol showed us how to overlay each part of the Wagon Wheel – the Rim, Spokes and the Hub. Using 15 power binos and our own binos, he pointed out the major game trails which contour across the face (Rim), the game trails (Spokes) which travel down to the feeding areas (Hubs) and back to the various bedding areas which change every time the weather conditions change.

Errol then showed us where they would bed in different weather and where and when they would feed in the various type of weather and in light to heavy hunting pressure. At first light on Sunday morning we climbed to a saddle and dropped over to watch for deer travelling back into their beds. Shortly after we sat down 4 hinds appeared, making their way up to the bedding area. The older hind bedded just 230 yards away from us whilst the other three grazed.

It happened just like Errol said it would on the previous day whilst explaining the many variables which determine what sambar do at any time. Errol explained that sambar do the same things every day. But what changes every day is where they do what they do and that is determined by the weather and hunting pressure.

For eight of us to be sitting there watching these unaware deer was a real eye opener.

Over several hours Errol explained all the “must knows” about their behaviour and showed us how to set up for a shot. Then, using Errol’s super accurate rifle and a Vixen 2.5-10x56 scope supported by a bipod, several of the boys took a simulated shot at the bedded hind and another standing 300 metres away. Errol made her stop in her tracks long enough for the shot. Seeing him do that was a real eye opener. All said they were so steady that they were 100 per cent confident of a one shot kill on both deer.I’ve been hunting sambar deer for 15 years and now wish I had attended this course a long time ago. I learnt more in 3 days with Errol, than in the 15 years I have been hunting them. 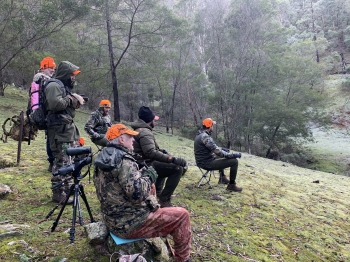 Become a Hunt Smart ® hunter like Cameron Tull - buy my books or magazine, enrol in a Hunt Smart® Course or sign up for my FREE newsletter today!
Errol Mason