Sambar harvested by Geoff McClure at a range of about 140m as it grazed along a creek. It was overcast and half an hour before dark and initially the deer was spotted through overhanging foliage using Vixen Apex Pro 8 x 42 binoculars. Despite the low light when Geoff the rifle up he could clearly seethe deer through the foliage and long grass. The crisp image of the reticle and the deer made it an easy shot with a bipod.

I have taken 3 Sambar with the new scope and was most impressed with the performance in poor light. The first deer taken was at a range of about 140 metres as it grazed along a creek line in long grass. It was overcast and half an hour before dark and initially the deer was observed through overhanging foliage using my Vixen Apex Pro 8 x 42 binoculars. Despite the low light when I put the rifle up I could clearly see the deer through the foliage and long grass. The crisp image of the reticle and the deer made it an easy shot with a bipod.

The second deer was taken whilst walking along a steep creek gully covered in tea-tree. Light was very low down in the gully. I put up a young stag and it ran through a dark section of cover. With the scope set on 2.5X I was able to obtain rapid target acquisition and the red dot in the centre of the reticle made shot placement easy on this running stag.

The third deer was bagged during a late afternoon sit-off near the edge of an extensive tea-tree area. I was lying prone and glassing the edge of the cover when I observed a Sambar hind just inside the edge of the tea-tree, the sun had just set and it was hard to see. I wound the scope up to 10 power and turned on the red dot.

The deer was standing still quartering towards me. It was a 180 metre shot but with a bipod and the clear image of the deer in the scope I was confident. She went down on the spot.

Three shots for three deer with the new Vixen LVF scope. You can’t ask for much more than that.

I love the design of the German # reticle and feel Vixen have perfected it for low light Sambar hunting.

I found the elevation and windage adjustments to be extremely accurate which made sighting in a breeze. When I moved it 4 clicks it moved exactly 1 inch at 100 yards.

Overall, this scope provides the deer hunter with outstanding performance at a very affordable price. 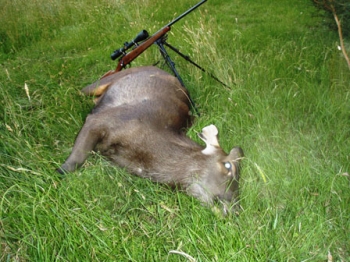 Become a Hunt Smart ® hunter like Geoff McClure - buy my books or magazine, enrol in a Hunt Smart® Course or sign up for my FREE newsletter today!
Errol Mason