I just returned from a successful hunt after attending Errol’s course earlier this year. I hunted a gully that had several feeders, good north facing slopes as well as access to prime pasture.

After a day of scouting and glassing I chose a spot which was a ‘funnel’ from the farmland with a view into the flats as meat was my primary goal for this hunt. I did a sit and wait at dusk however did not see anything that night. So I moved closer to the pasture to another site that I had chosen and had prepared.

I got up at 4am and it was a relatively warm 8°C and foggy when I awoke. I followed the creek into my spot that had a great view of the flats from across a creek.

I sat glassing until about 40 minutes after first light by which time it was quite bright and I could hear traffic and dogs from the nearby town so I was adamant that I must have missed them coming off the pasture. I knelt up, started to fold my stool then ‘honk’ and several deer thundered up the face behind me. Thinking I was definitely done, I then heard another honk, stamping feet and honk again. Knowing that it was a deer looking for me, I was on my Vixen binos again. I found a hind looking at me from about 100m away. Binos down, rifle up, red dot adjusted on the hind and I managed to get a good quartering shot into the shoulder that went straight into the lungs.

She ran back up the trail and I waited about ten minutes then followed her up. The blood trail was significant and bright in the rising sun and I found her 30m from where she had been hit. A great meat animal and my first Sambar. As it was down on the flats I was able to get my 4WD within 150m making for an easy carry out.

I was stoked to have my first Sambar and a freezer full of meat for the family.  Although not a fantastic antler trophy for me the real trophy is prime venison for my family as well as a great confidence boost after several unsuccessful (but educational) hunts.

Thanks again for not just your course, but advice on optics, tactics and tips prior to and since my course. 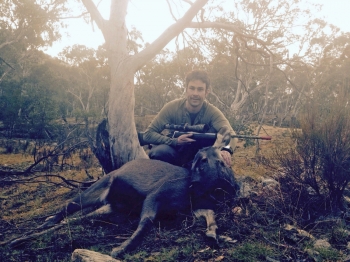 Become a Hunt Smart ® hunter like Dave Parker - buy my books or magazine, enrol in a Hunt Smart® Course or sign up for my FREE newsletter today!
Errol Mason