We became Ninjas of the highest order. Our newly bought safari slings installed ready for action, bino at the ready and a brain full of newly taught special skills, Sambar dinner was on the way. After moving stealthily for just 90m with the breeze in our face, I spotted a deer in its bed ruminating, just like Errol said. When the next gust of wind masked my sound I snuck forward to the next tree. I didn’t range the shot. It was close there was no need.

The deer was lying on its left side giving us what would be a quartering on shot. Due to the time I had up my sleeve and the amount of neck that was presented as the deer munched away, I decided it was time to try this neck shot out.

Boom, fast reload and the bush exploded with 6 other deer running everywhere. Simmo tried to nail one but they wouldn’t hold up. I resettled and then noticed an antler. I told myself focus on the shot. Next round into the right shoulder blade. The deer wouldn’t have even heard the first shot but I wanted to make sure it wasn’t just wounded or that I had completely missed. Both shots were perfect; those hours on the bench have paid off.

I ran over with excitement, couldn’t believe my eyes, 12 years of chasing Sambar and never having put a stag down and here it was in front of me. I was pretty emotional, I didn’t cry because I am a manly man obviously haha. He was no record breaker but was a brilliant mature stag with a harem of ladies who this day were also caught out unaware of our presence. He went 18x18 with a 19 spread but perfect form.

I had a couple of minutes to admire the animal. When Simmo returned it was time to get the back straps and meat ready for the carry out including my first stag for the wall. We searched for the projectiles but after we looked bloody everywhere couldn’t find any of them. The damage to the neck was immense. You could put your hand through to the other side and there was shrapnel from the spine everywhere. Both shoulders destroyed and he would never have even heard the shot. I ranged it at 54 m Once back at camp, we hung the back straps to cool and settled ready for dinner. Obviously, a celebratory lager was produced.

Prior to his course I probably would have ignored this gully, but what he taught us it seemed like the perfect choice. Protected from storms, hidden in plain sight, plenty of feed, cover and sun, zones of silence and close to good feed. It had everything that Sambar need to thrive.

So get out there, the deer are there. Stay safe and Happy hunting. 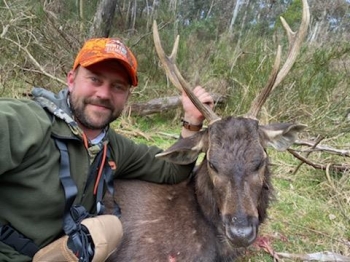 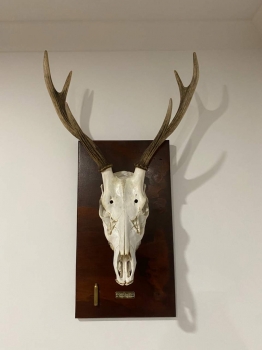 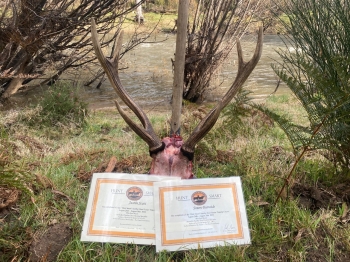 Become a Hunt Smart ® hunter like Justin Scott - buy my books or magazine, enrol in a Hunt Smart® Course or sign up for my FREE newsletter today!
Errol Mason