I have been hunting deer over the past 2 years and have had some success with the 'Walking Them Up' method of hunting that I taught myself following reading pretty much everything I could get my hands on as well as watching most of the videos available. To date I had managed 3 Sambar and 4 Fallow deer but no Sambar Stags. The best I had managed to achieve was fleeting glances of a departing stag even though I had watched Hinds through the binos on a couple of occasions for lengthy periods.

I figured there had to be a better way and have always considered the key to success is knowledge. After seeing a number of Errol’s photos of unalarmed sambar (unalarmed being the key) and reading his articles, I guessed that his knowledge was far better than mine, I just didn’t realize how much better. I knew how to put deer up and on that basis I figured I must have walked past many more than those I had alarmed, but this method was leading to more frustration than reward.

To learn a hunting method that has taken 25inch plus stags consistently year after year for Errol’s clients and be taught the science behind the method to back it up so that you can then put them into practice for yourself. You just cannot beat being taken to the area of a previously successful hunt and worked through deciding is there is a resident stag, how big is he likely to be, what and where is he eating, where is he sleeping, and how do I get an opportunity to hunt him, whilst un alarmed, so as not to risk wounding a magnificent specimen and then see the photos of the stag to prove the science and technique.

Concurrently Errol will advise you of the most suitable hunting kit for deer and in doing so may just save you a fortune in ensuring you get the right gear the first time round. As it turned out, Errol’s and my gear were remarkable similar however I might add I have sold, shelved or given more gear away than I care to admit and of course lost money in arriving at my hunting kit via trail and error based on half the B.S you will be told by so called experts who wish to sell you something. Errol knows hunting gear from rifles to calibres to projectiles to optics to meat safes to tree stands to back packs to everything in between from all around the world and he’s done the trial and error thing for you.

2 ½ days of solid tuition from 7am to 10pm that’s jammed packed with information. So you will mentally tired but not physically exhausted from your time in the bush so long as you are moderately fit

The 11th of September 2009 found me attending Errol Mason’s Hunt Smart Sambar training course along with three of my mates, including Andrew Jones, who I had persuaded to come along. A great weekend was had and armed with the extra knowledge gained, Andrew and I headed straight up over Hotham to prepare for our high country hunt.

We had been planning this hunt for 12 months. I had hunted the chosen area the previous year using the traditional back pack method, hiking in behind the closed gates. Hence the previous years’ experience provided a sound base on which to hunt the same area that I knew held a significant number of deer. I was excited to be heading back armed with last year’s experience and the new knowledge gained from Errol.

Two days after attending the course, with the help of my mate Andrew Jones, and employing tips learnt on the course, I took this magnificent sambar stag. Our thanks to Errol for his pearls of wisdom that helped make this a highly successful and enjoyable hunt. 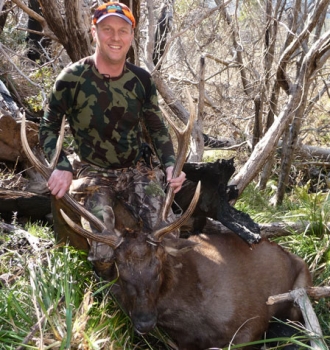 Become a Hunt Smart ® hunter like Matt Appleton - buy my books or magazine, enrol in a Hunt Smart® Course or sign up for my FREE newsletter today!
Errol Mason